After four years, and 45,000 miles, our Pinnacle was ready for new brakes. This article describes the procedure for replacing the brakes and maintaining the wheel bearings.
I decided to use genuine Dexter replacement brake assemblies, which cost $100 each, rather than replace the shoes and magnets, which would have cost $88 per wheel using Dexter parts. The brakes were purchased from Cerka in Milton, Ontario, which is a wholesale trailer parts distributor. 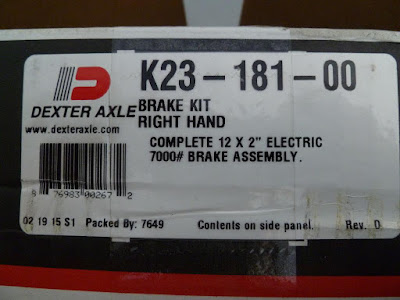 I jacked up the first axle using a hydraulic jack under the spring saddle U-bolts, which does not place any bending stresses on the axle tube. It is only necessary to lift the axle about 1/2", just enough to take the weight off the tire. I used an electric impact wrench to remove the wheel. Next step was to remove the locking device (or cotter pin on older axles) and the nut, then the washer and outer bearing. The brake drum should then easily pull off. 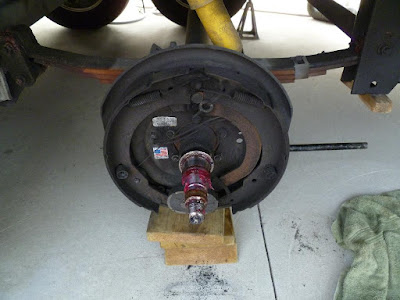 The wires to the brake solenoid were cut behind the backing plate, and the five 3/8" nuts were removed, then the old brake assembly was removed from the axle. 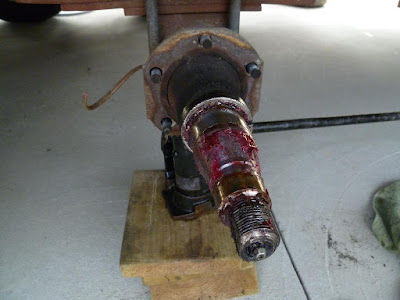 Next step was to remove the old seal from the brake drum, and discard it. The inner bearing could then be removed. The bearings should be inspected, paying particular attention to any signs of scoring or pitting on the rollers or the outer bearing races in the brake drum. I used a bearing packer tool to push out the old grease from the bearing races and pump in new grease.This tool is used with a grease gun, and I used Mobil1 synthetic grease. 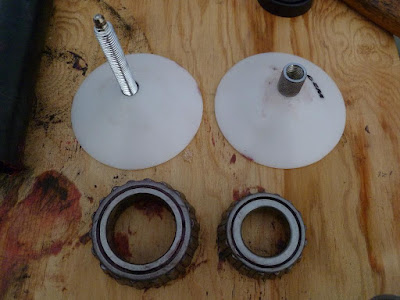 Once the bearing races were packed with new grease, I placed the inner race in the hub, and then drove in a new seal using a flat block of wood.

The new brake assembly was then installed on the axle, using the five 3/8" nuts that were removed earlier. Take care not to pinch the solenoid wires between the axle flange and the new brake (ask me how I know this!). The brakes are labelled "left hand" and "right hand", according to the side of the trailer. 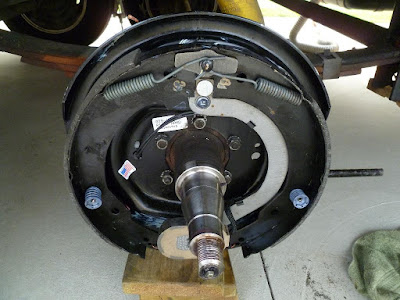 The brake drum was installed on the axle, the outer bearing race installed, along with the washer and nut. The adjusting procedure is as follows:
-Tighten the nut quite tight using a wrench, socket, or even a pair of channelock pliers. Rotate the wheel while tightening.
-Back off the nut until it just becomes loose. DO NOT ROTATE THE WHEEL.
-Tighten the nut using fingers only, and install the locking device or cotter pin.
I then installed the wheel, and adjusted the brake so that there was a little drag when the wheel was rotated. The brake adjustment is performed through the access slot in the backing plate, using a large flat screwdriver. The plastic plug was replaced in the slot. 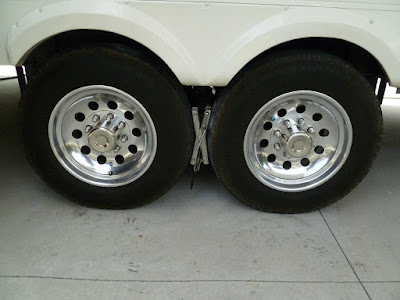 The job was now complete, and the same procedure was followed for the other wheels. Total time to do the entire job for four wheels was 3 - 4 hours. There are several advantages to doing this job yourself:
-Savings of up to $1000
-The knowledge that the critical bearing lubrication and adjustment was performed correctly, with the proper care.
-If you are a fulltimer like us, not having to leave your home and possessions at a service facility.
-The personal satisfaction of having accomplished the task yourself.
-The knowledge that, if a brake or bearing issue occurs on the road, you have the ability to do a repair.
Easy-Lube Axles
Our Pinnacle was equipped from the factory with Dexter Easy-Lube axles, which have a grease fitting in the axle end, and a drilled hole through to a point between the seal and the inner bearing race. With past fifthwheels, I have experienced problems with this system, resulting in grease-contaminated brake shoes and drums, and almost zero braking effectiveness, which with a 16,000 lb unit, is a scary thing.
If the recommended procedure is followed EXACTLY, the seals are in good condition, it is not too cold, and the planets are aligned correctly, it is possible to lube the bearings without getting grease on the brakes. However, I feel the need to inspect the bearings and brakes annually, because these are critical components, and our home is literally riding on them. To do this inspection, the hubs must be disassembled, and at this point it is easy to grease the bearings while doing the inspection, and replace the seals with new ones at $3 each. This way, I KNOW that I do not have grease-contaminated brakes.