As mentioned in an earlier post, our 14 year old Yamaha inverter generator malfunctioned on the last day of our westbound journey, resulting in the destruction of the original equipment Apollo Half-Time convection microwave. The main control module in the generator, which is a hermetically-sealed module and non-repairable, decided it would go on a rampage and no longer regulate the voltage and frequency. I discovered during testing that the voltage output varied between 20 and 190 volts, and the frequency underwent wild excursions from the required 60 HZ, all the way up to 500 HZ, which is probably what finished off the electronics in the microwave.

All other electronics in our rig, except the washer-dryer, run full time from the sine wave inverter. This was fortunate, as we would have been replacing two televisions and miscellaneous other electronic devices. The washer-dryer was disconnected at the circuit breaker, as is my custom when we are on the road. The Progressive Dynamics charger-converter survived, probably because it is internally protected against high input voltage.


First on our list was the microwave. I removed the heavy Apollo unit, with great difficulty and muttered imprecations, fortunately with all my fingers still attached. I checked the internal fuse, which was not blown. I inspected the control board, and could find nothing that was visually burnt, so we made the decision to replace the unit. A new Apollo costs over $500, and weighs about 85 lbs. We hardly ever used the half-time or convection features, so we decided to replace it with a compact Panasonic microwave with a stainless-steel front, to match our Samsung residential refrigerator. I like Panasonic microwave ovens, because of their inverter technology, which I believe results in more even cooking and defrosting. I had some cabinet modifications to perform to allow installation of the Panasonic, which kept me busy for a couple of days. One benefit is that the Panasonic weighs 20 lbs, compared to the 85 lbs of the original oven. Panasonic's inverter design allows for a much lighter unit, eliminating the heavy transformer and replacing it with a lightweight switching power supply.

I gave considerable thought to the replacement of the generator. I wanted a unit which would fit in the existing diamond-plate aluminum enclosure in the truck bed, and this eliminated the Honda EU3000 from the competition, due its cube design, which will not fit in the available space. The two units which I seriously considered, were the Yamaha EF3000iSEB and the Champion 3400 watt with remote starting. 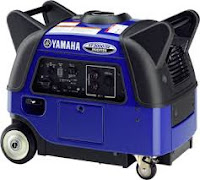 The Yamaha has a solid reliability reputation, even though mine failed after 14 years. Cost of the Yamaha in the USA is around $2100 USD, but it does not have remote start. Remote start capability adds another $450, for a total cost of $2550 USD. Continuous running watts is 2800, with a small additional surge capability provided by the battery boost feature (this is the "B" in EF3000iSEB). 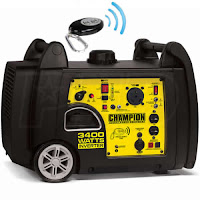 The Champion is available for $999 USD, has built-in wireless remote start with a servo-operated choke, and a continuous running rating of 3100 watts, with 3400 watts peak for up to 5 minutes. It now includes a 3 year factory warranty, valid in Canada and the USA. Noise rating is similar to the Yamaha.

I spent several hours online reading reviews for the Champion unit, and read at least 200 reviews, some of them very detailed. I could not find one instance of the unit failing, and the only criticisms were relatively minor complaints, like the fuel filler cap cross-threading, or shipping difficulties. The overwhelming majority of the reviews were very positive, and full of praise for the generator, especially the remote start feature.

I made the decision to purchase the Champion, from Nationwide Generators in Illinois. Shipping via UPS was included in the price, and there was no sales tax, because the unit was shipped outside Illinois to California. The unit is due to be delivered tomorrow, and I will update this article after I have installed and run the generator.


Replacement of the kitchen range

We have lived fulltime in our fifthwheel since June 2011, and over this time we have done a number of modifications to make our living experience more comfortable, and less of a compromise. One shortcoming which we have not addressed until now, is the inadequate cooking facilities, consisting of an Atwood 3-burner cooktop with a minuscule propane oven. We decided, while doing the modifications to install the new microwave, to rectify this situation.

We initially investigated a 24 inch wide gas range, and found the choice of units to be extremely limited, and mostly lower-end "apartment-sized" offerings. I got my trusty tape measure, and started measuring. I found that, with some cabinet and counter top modifications, we could fit a full-size 30 inch residential range in the space available. We started doing some online browsing, and while we were in the local Home Depot picking up some supplies, decided to look at their line of ranges. We saw a Samsung gas range in stainless steel to match our refrigerator, with five burners and self-clean convection oven. It was on sale for $649 USD, reduced from a regular price of $1100 USD. We ordered this unit, for delivery to our RV resort. The delivery took about a week from the Samsung distribution center. Meanwhile, I removed the RV range and began the work necessary to install the new unit. 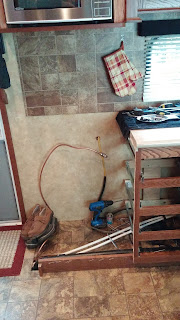 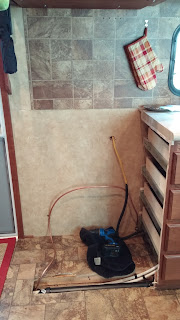 I cut the counter top just to the right of the original range, using a reciprocating saw with a metal-cutting blade, which cut the imitation marble counter material with little difficulty. I removed the short 6 inch piece of counter to the left of the old range, along with the cabinet end and the drawer below.

The most difficult part of the remodel was the relocation of the existing 1 1/2 inch ABS drain line from the kitchen sinks, which ran above the floor, under the drawer which I removed. The water supply lines to the sinks were also there. These pipes would obviously interfere with the new Samsung range, and would have to be moved.

Using a jigsaw, I cut a 3 inch opening from left to right in the plywood floor, and cut off the existing drain pipe, which was connected to the kitchen gray water tank at the left in the picture, where it turns downward with an elbow. I removed the pipe from the rubber collar in the top of the tank. Using new ABS fittings, I installed two elbows to drop the pipe below the level of the floor, and reconnected it to the gray tank, securing the connection with sealant. The white water supply lines were easily relocated below the floor level. The opening in the floor will be underneath the new range, and not visible.

I installed an electrical outlet in this opening, connected to the inverter supply, to take care of the new gas range's minimal electrical requirements. I like running low-consumption electronics from the inverter full time; they are isolated from power interruptions and fluctuations.  The existing 3/8 inch copper propane line was easily modified to connect to the new range.

Everything was now ready, and the range was delivered. It came in through the entry door easily, once the oven door was removed. Before moving the range into position, I installed the supplied propane conversion kit. This involved changing seven orifices and changing over the dual function gas regulator. The new Samsung was then pushed back into its spot, and the only thing remaining was to secure it to the floor to prevent movement while under way. The range has a "child lock" feature, selected with a button on the keypad. This locks the oven door, which will be great when on the move, eliminating the need for velcro straps to keep the door from opening.

The last modification I made was to relocate the drawer which was previously under the range, to the end of the kitchen cabinet, as shown.

Weight is always a consideration in a traveling RV, and the new range weighs 210 lbs. It is directly over the axles, and we are running 16 ply commercial tires with lots of excess load capacity. Even so, we must be mindful of everything we add and take away, to keep a handle on our gross weight. We are saving 65 lbs by replacing the heavy microwave with a lighter unit, and the RV range we removed weighs 45 lbs. The portions of countertop and cabinet we removed weigh 30 lbs. This results in a net weight gain of 210 - 145 = 65 lbs, which I believe is a reasonable trade-off for the much better functionality of the new range. I will weigh our rig during our eastbound trip in April, so I can be sure that our gross weight is below the maximum GVWR of 16,000 lbs.

We now have state-of-the-art cooking facilities on board, and I eagerly await the gastronomic delights which will ensue when the astute Navigator puts her considerable culinary prowess to good use. One consolation is that if I gain weight because of the exquisite cuisine, while moving this added load will be in the truck, not the fifthwheel. 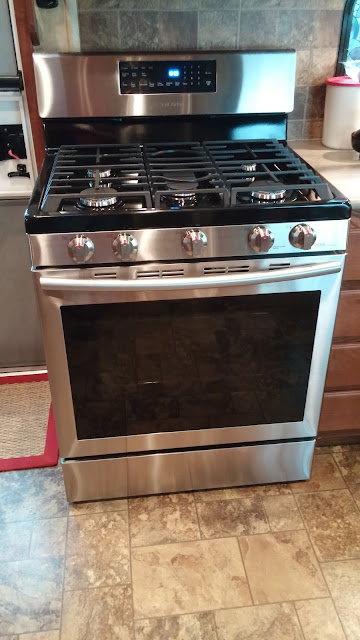