We left Boerne, TX after an enjoyable 5 day stay over the Christmas holiday, and headed west on I-10.

Our destination for the night was Balmorhea, TX, which is in the desert of west Texas, just east of the junction of I-20 and I-10. These two interstates converge into one, and continue west as I-10 through El Paso.

We stayed at Saddleback Mountain RV Park, a Passport America park which is well laid out and nicely landscaped with desert plants and trees. We have stayed at this park several times, and the cost is an incredibly reasonable $10 per night, full hookups, 50 amp. 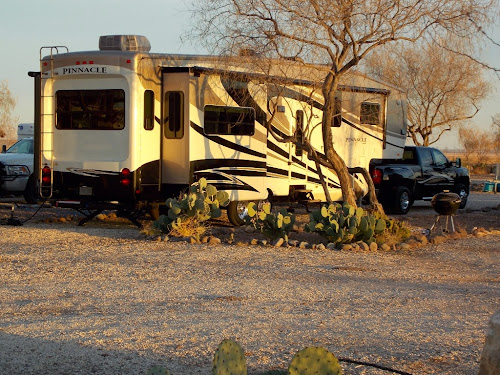 Our intention was to stay one night, but during the night the temperature dropped well below freezing, and it started to snow. We checked online and found that highway conditions through Sierra Blanca, west of Balmorhea, were treacherous, and we decided to stay put and relax for a second day. In the past every time we have stayed at Balmorhea, it has been warm enough to require the use of air conditioning, so this was different!

We left Balmorhea after two days, and headed west through El Paso to our next stop, Las Cruces, NM. We stayed two nights at Coachlight Motel and RV Park, another Passport America park where we have stayed several times. 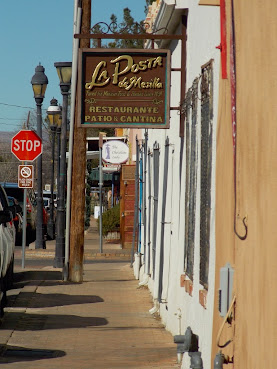 We visited the settlement of Mesilla (pronounced "Meh-see-ya"), which is a historic Mexican district just outside Las Cruces. We spent an enjoyable afternoon walking around Mesilla, followed by a delectable Mexican-style steak dinner at La Posta restaurant, which is on Calle De San Albino. Mesilla really shows off the Mexican heritage found all over New Mexico, and it is well worth a visit.

We left Las Cruces on December 30, and continued west to Benson, AZ. We stayed at Benson I-10 RV Park, which is Passport America (obviously!), and is another spacious park on the edge of Benson. On the afternoon of New Year's Eve we drove to Tombstone, a historic western town about 25 miles from Benson. Tombstone is another place worth visiting, and it is rich with the history of the 1880's silver mining era. It is where the Earp brothers (Wyatt Earp was one of them) met their doom.

During the evening of New Year's Eve, it became extremely windy, with blowing snow, and our RV was buffeted by 50 mile per hour gusts. New Year's Day dawned to bright sunshine, clear blue sky and calm weather.

Tomorrow we will depart and head west through Tucson to Casa Grande, where we will branch onto I-8 and drive to El Centro, CA, which is in the agricultural country close to the Mexico border. We will stay overnight, and leave the next day for the last leg of our journey, a 120 mile drive up State Route 79 to Aguanga, CA. The drive on SR-79 will be interesting, as the highway is very scenic and winding, through Julian and Santa Ysabel. The recommended maximum kingpin-to-rear-axle distance is 30 feet, and we are at 29 feet, so we are within the recommended limits. I will report in a later post on this drive.