We left Benson AZ after a hearty breakfast at Denny's next to the campground, and soon we passed through the city of Tucson, then Casa Grande, and had a nice easy drive across the Sonoran Desert to Yuma AZ, which is on the Arizona - California state line. Interstate 8 across the desert was almost deserted, and I took advantage of the arrow-straight highway, sparse traffic and a 75 mph (120 kph) speed limit to increase our cruise speed to 74 mph. There was a moderate tailwind, we achieved 11.5 mpg at this speed, and covered the distance quickly.

We have stayed in Yuma several times, always in April, and Yuma in January is completely different. It is a popular snowbird population for people from the northwest US and western Canada, and the population doubles for the months of January to March. Next year on our westbound trip, we will continue through Yuma without stopping overnight.

We left I-8 at El Centro, and drove north on CA111, which took us up the Imperial Valley to the southern tip of the Salton Sea, where we picked up CA78, which took us through the Anza-Borrego desert and up into the Palomar Mountains. The views along this route as we climbed were quite spectacular. We were coming in ahead of a major Pacific winter storm system that would result in snow in the mountains, so our timing was critical.


We arrived at Rancho California Resort at noon, and parked in our site for the next three months. I will publish some pictures of our site in a couple of days. It backs onto the golf course and has a full buildout complete with kitchen and appliances. 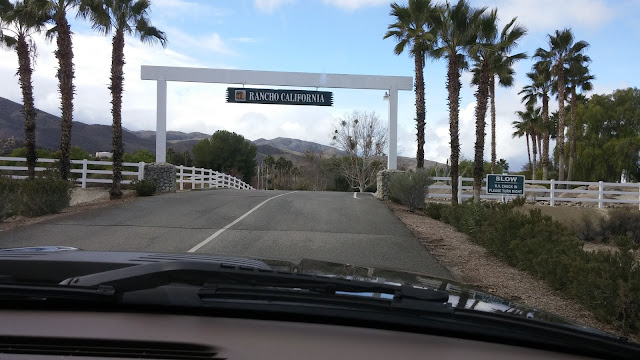