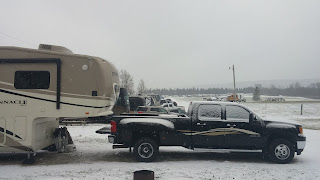 We stayed at Milton Heights Campground for five weeks, and finally made preparations for departure on December 14.
The weather in the days preceding December 14 changed to the traditional normal winter weather for Southern Ontario, and this served to remind us of why we choose to migrate every year to warmer climes. The temperatures were dipping to -10C (14F) at night, and there was about 9 inches of snowfall. A particularly unpleasant task was cleaning the accumulated snow from the slide toppers to facilitate the retraction of our slideouts. 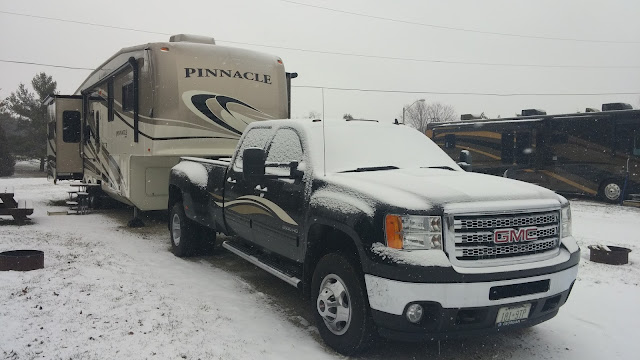 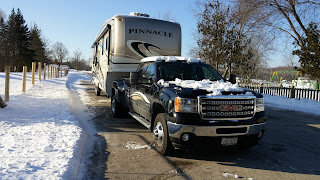 The morning of December 14 finally came, and we connected our Pinnacle to the truck, filled the freshwater tank, unhooked our services, parked our Honda in the storage yard, and pulled out of Milton Heights after a really nice 5 week stay. Reluctantly, we chose Windsor-Detroit as our port of entry to the USA, because the other two routes, Fort Erie-Buffalo and Sarnia-Port Huron, were experiencing heavy lake-effect snow. The Detroit route appeared to be clear, albeit bitterly cold.


The drive to Windsor was uneventful, and there was only a short wait at the bridge. The Border Services agent at the USA point of entry asked the usual questions, and we gave the usual answers. It seems that a small number of the border guards are brusque to the point of rudeness. We, being experienced at crossing the border, arrive fully prepared, and we are always respectful and polite. Unfortunately, a few of the agents seem to like being intimidating. They make the decision on whether to admit us as visitors, so one must "bite one's tongue" and remain calm and polite.

This time at the border crossing, I did not need to go into the building to obtain my usual I-94W visa waiver document, as I entered the USA using my brand new Canadian passport, which I obtained shortly after becoming a Canadian Citizen last May. This made the process somewhat faster, and saved me $6 US.

Once into Michigan, we drove south from Detroit on I-75, over pavement that had deteriorated to a degree that can only be described as inexcusable. I realize that the State of Michigan, especially the Detroit area, is experiencing some financial issues, but the 50 miles to the Ohio state line were just disgusting, consisting of broken concrete and frost heaves interspersed with potholes large enough to swallow a truck wheel complete with tire. After we crossed into Ohio, it was heavenly, with smooth asphalt.

We stopped for the night at a Walmart in Wapakoneta, Ohio, went into the store, and obtained permission to park overnight from a friendly duty manager. We spent a restful night, with our trusty Yamaha generator running, and the furnace working overtime keeping us warm and comfortable with an outside temperature of -16C (4F). Our onboard water system was fine, and nothing froze. I am grateful for the thought Jayco applied to the plumbing system design of our Pinnacle. It was great to take a hot shower in the morning, with bone-chilling temperatures and a 30 mph west wind outside.

Thursday morning, we had breakfast in front of a crackling log fireplace at the Wapakoneta Cracker Barrel, 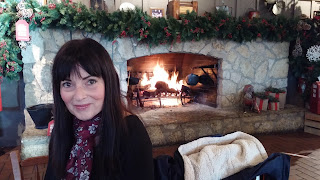 and with full tummies, got on I-75 south and headed for Cincinnati, where we took I-71 to I-65 just south of Louisville, Kentucky. At around 2:00pm we reached our destination for the day, Singing Hills RV Park near Cave City, Kentucky. We have stayed here many times, and this time we stayed for two nights. We drove into Bowling Green on Friday, bought AT&T SIM cards for our Canadian phones, had a very good lunch at India Oven restaurant, and visited the Bowling Green Railpark and Museum in the afternoon.

The Rail Museum was well worth the visit, at $10 each. They have an incredible period-accurate model railroad layout which is the most comprehensive that I have ever seen.
It must have taken many enthusiasts years of painstaking work to achieve this level of detail and realism. One of the model locomotives has a miniature video camera mounted, and the on-screen view as it goes down the track is nothing short of astounding. Afterwards, we received a personal guided tour of several restored 1950s-era passenger railcars, including a look inside a 1964 diesel locomotive.

Nasty wintry weather was forecast for the weekend, so we left on Saturday and headed toward Nashville, taking the Briley Parkway bypass to I-40 westbound, and picking up the Natchez Trace Parkway at its northern terminus.We had a beautiful relaxing drive down the parkway to Tupelo, Mississippi, which is where we are located as I write this.


When we arrived at Natchez Trace RV Park near Tupelo, the temperature was 23C (73F). It was warm enough that we required a touch of air conditioning inside the rig that evening. Unfortunately, those temperatures were short-lived, as a cold front was forecast to pass through around midnight, with severe thunderstorm warnings and temperatures plummeting to -1C (30F) overnight. We experienced heavy rain in the night, but thankfully no severe weather.

We will be staying at Natchez Trace RV Park for three nights, and leaving for Vicksburg, Mississippi on Tuesday. Watch for a new post in a few days.