It is April 23, and we are here near Freeport, Florida for a nine-day stay at Live Oak Landing resort, located on the Choctawhatchee River where it joins Choctawhatchee Bay, which is the large inland "sea" separating Santa Rosa Island from the mainland.
We are at location "K" on the map. 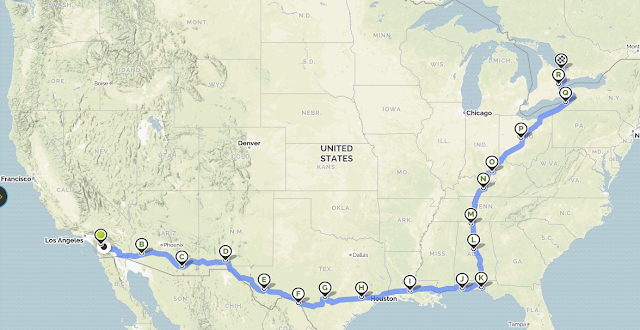 The drive from Alpine in Southwest Texas was relaxing and interesting. We took US90 this year, all the way from Van Horn in extreme western Texas, to Del Rio, a border city southwest of San Antonio. The drive through the Canyonlands between Alpine and Del Rio was simply wonderful, with almost no traffic on the smooth two-lane highway. From Del Rio, we branched northeast on US377 and TX41 through Rocksprings, to Boerne, where we stayed at Top of the Hill RV Resort for three days.

I think that in the future, we will often use this US90 route as an alternative to I-10, which even in this sparsely-populated part of Texas, can be fairly busy. Our average speed on the two-lane US90 is close to what we would achieve driving on I-10, and because the small towns are 50 miles or more apart, it is a beautiful, interesting drive.

While in Boerne, we spent a day in nearby Fredericksburg, a Hill Country town with German roots. The Texas wildflowers in the region were at their peak, with stunning displays along all the highways and secondary roads.

After leaving Boerne, we took TX46 through New Braunfels to join I-10 east of San Antonio, to avoid the San Antonio traffic. We stopped for the night at Katy Lake RV Resort, a nice higher-end resort in Katy, a western suburb of Houston. They give the 50% Passport America discount for one night. We passed through Houston uneventfully early on Sunday morning.

Our next stop was at Poche's RV Park and Fishing, in Breaux Bridge, Louisiana. This turned out to be a fascinating place to stay. Poche's is a local family who own the RV park, and a restaurant and specialty meat-smoking business nearby, where we stopped for breakfast the following morning. I have always wanted to try Boudin and Cracklins, which one can see advertised on billboards along the highway. Everyone purports to have the absolute best product, and I thought that this was a great opportunity to purchase some at the store. I bought some frozen Crawfish Boudin, which is a spicy loosely-packed sausage with rice, crawfish and spices, and a bag of Cracklins, which was weighed out from a 5 gallon plastic pail. Cracklins are spicy fried pork rinds, and they are quite delicious, but unfortunately are probably quite bad for you. Still, moderation is the key.


We next made a stop at the Stennis Space Center, just across the state line in Mississippi. We took a bus tour of the rocket engine test facility, where the Appollo moon rockets, and the Space Shuttle engines were tested. As Canadian citizens, we were required to show our Canadian passports to go on the tour of the restricted facilities.


The engine test facility is still in use, testing the next generation of rocket boosters, which will be used for future Mars missions.


We were told by our NASA guide, that during the tests of the Saturn 5 engines in the 1960s, the surrounding area experienced ground tremors which registered on the Richter Scale, because of the enormous thrust of these engines.


I have an intense interest in space exploration, which I believe is the ultimate destiny for the human race. If a small fraction of the money spent worldwide on military expenses, were dedicated to space exploration, we would be colonizing the solar system in short order. 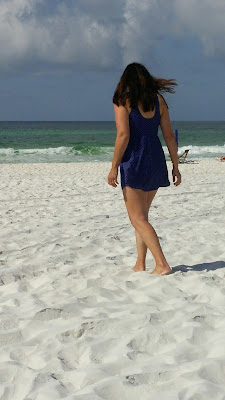 After an overnight stop in Gulfport, we continued to Foley, Alabama, for a two-night stay. We visited with our Cedarwood next-door neighbours, who own a beautiful RV lot in Bella Terra resort. Following a short 125 mile drive through Pensacola, we arrived at Live Oak Landing RV Resort for a nine-day stay. Your blogger, and my wonderful Navigator, will celebrate our forty-sixth wedding anniversary on April 24, here in Northwest Florida.

In this picture she is walking on the sand at Dune Allen beach, down the road from Topsail Hill State Park and RV Resort, where we stayed many times in the early 2000s.

My parents stayed at this resort for several winters in the late 1980s and early 1990s, in their 22 foot Prowler fifthwheel, which they pulled with a 1987 Dodge Ram pickup. My mother remembers with great fondness, those winters spent snowbirding at Emerald Coast RV Resort with my father, who passed away several years ago. Emerald Coast resort became part of Topsail Hill State Park around 2001, and the RV resort was kept much the same as when it was Emerald Coast.

As you can see, the beaches in this area are beautiful, with white sand and green-hued water; hence the name Emerald Coast. They are the nicest beaches we have seen anywhere on our travels in North America. There is good public beach access, which cannot be said of most of the Florida coast, which seems to be an endless expanse of condominiums.