It is May 3, and we are near Wytheville, Virginia, more than halfway from Florida to our home base for the Summer and Fall, Craighurst, Ontario. We are at "D" on the map. 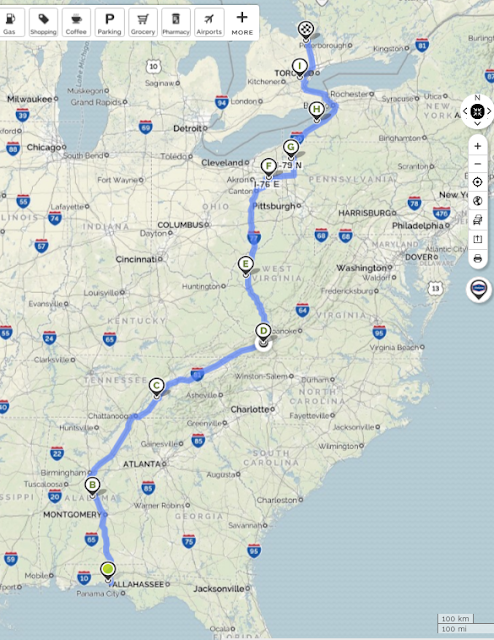 We decided before we left Florida to take an alternate route north, and not our usual I-65 / I-69 route which would have taken us through Birmingham, Nashville, Louisville and Indianapolis to a border crossing at Port Huron / Sarnia. We drove north on US331 to Montgomery, took I-65 to just south of Birmingham, then went northeast on I-59 and I-75 through Chattanooga and Knoxville, to our present location near Wythville.

This route makes a scenic change to our traditional northbound route, and takes us through the Appalachians, passing by the Smoky Mountains and Blue Ridge Mountains. From Wytheville, we will take I-77 north through Charleston, West Virginia, and bypass Akron and Cleveland by taking state highways to join I-90 at Erie, Pennsylvania.

After leaving Florida, we made our first stop at Clanton, Alabama, at a Passport America park which is part of a large RV sales and service facility, called Yellow Hammer RV Sales and Campground. Apart from some highway noise from the adjacent I-65, it was a good one-night stop. 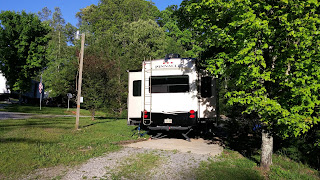 Our next stop for two nights was near Niota, Tennessee, a small village near Athens, 50 miles from Chattanooga. This was a small rural campground called Tennessee Country RV Campground, and we got their only concrete pad pullthrough site. Access was tricky, with steep hills and lots of trees in the campground. During our day there, we explored downtown Athens, which is a nice "Main Street" town of 15,000 with many historical buildings, and a great coffee house in a converted bank building right in the middle of downtown.


We left Niota, and continued north on I-75 through Knoxville. We were in the northwest corner of Georgia for about 20 minutes, then joined I-81 and entered Virginia. We proceeded north on I-81 to our present location, 15 miles from Wytheville. For two nights, we are in a really nice park called Deer Trail Campground, parked backing on to a creek, with roosters, goats and swans nearby. It is very quiet and peaceful here. There is absolutely no AT&T or Verizon cell service, but the park has a very fast free wifi connection, which allows us to use VOIP for phone calls, if needed. 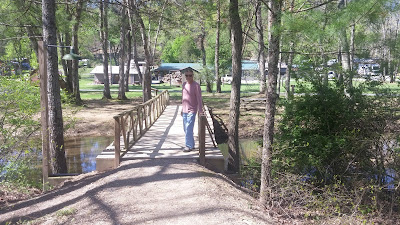 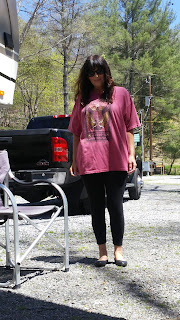 The road leading to the campground is smooth and paved, but quite narrow and winding. Turning from the state highway onto this secondary road, there was a drastic elevation change, and the front corner of the bedroom overhang of our fifthwheel contacted the back corner of the bed of our truck, resulting in some relatively minor cosmetic damage to the fifthwheel, which I will repair during our summer at home base. In 6 years and 60,000 miles (100,000km) of RVing with our rig, it is the first time this has happened. I will post an article later, describing this incident, and the steps I have already taken to avoid a recurrence.