We are now in West Texas, near a small town called Loraine, on I-20.

We stayed near Tupelo for three nights, at Natchez Trace RV Park, where we have stayed several times in the past. It is a quiet spot, close to Tupelo, which is a small city with the usual amenities. We stocked up on grocery supplies at Kroger's, and visited the birthplace of Elvis Presley, which is a very small two room house which has been preserved for history.

After leaving Tupelo, we proceeded southwest on the Natchez Trace Parkway until we reached Jackson, where we joined I-20 westbound to our next stop, Vicksburg, Mississippi. Vicksburg is a small historic city located on the Mississippi River, and we stayed at Rivertown RV Park for two nights, located 5 miles from town. We visited downtown Vicksburg, and I was somewhat disappointed by the general appearance of the downtown. There are many older buildings, but the general impression was one of being somewhat run-down and shabby-looking. This is a shame, because with an injection of some funds the downtown area could become an attractive place to visit for tourists.

After leaving Vicksburg, we continued west on I-20 toward the Texas state line, and our next stop, Jefferson. We arrived at Jefferson around 2:00pm, and checked into Diamond Don's RV Park. Diamond Don is a well-known local character who owns the RV Park, and the Historic Jefferson Railway. He is active in the Motocross world, and hosts an annual vintage motocross race event which is attended by competitors from around the world. In fact, the singer Lyle Lovett was one of the competitors.

The Historic Jefferson Railway is a narrow-gauge line which was built many years ago for the local logging industry. This region is part of the "Piney Woods", which is an area of east Texas, west Louisiana and southern Arkansas, with extensive forests of Southern Pine. The track, a steam locomotive and rolling stock were purchased by Diamond Don a few years ago, and he has turned it into a popular local tourist attraction. The line runs from a train depot in downtown Jefferson, two miles to the RV Park, along the bank of the Big Cypress Bayou. There is a turning loop in the RV Park, and the train returns to the depot. The track ran just behind our RV site, so every evening we had the privilege of watching the Christmas Light Train pass by, laden with 200 or so passengers, pulled by the Robert T. Lee, which is the restored steam locomotive. The sound of the steam and the smell of the wood-burning boiler will be lasting memories. 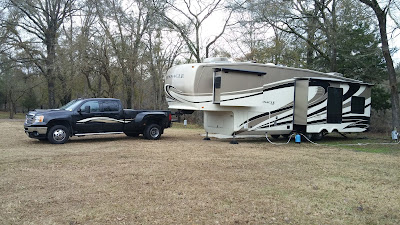 While in Jefferson, we visited the Museum, and had a very memorable dinner at the Stillwater Inn, a fine restaurant located in a historic old house in town. It was the birthday of the perspicacious Navigator, and it was a fitting meal for the occasion.

We celebrated Christmas on the evening of December 24, as is the family custom of the Navigator, while in Jefferson. We enjoyed the customary turkey dinner with the trimmings in the comfort of our RV, on the bank of Big Cypress Bayou. The next morning, we packed up and headed west once more, so we could pass through Dallas-Fort Worth on Christmas Day, with less traffic.

We passed through the Dallas Metroplex uneventfully, which is always good, and proceeded to a small campground at Mingus, TX, for the night.
The owners greeted us just like family, and made us feel like valued guests. We continued the next day to our present location, at Loraine, TX.

One thing that has really impressed us this year, as we travel through the state of Texas, is the incredibly warm welcome we receive everywhere we go. Perhaps it is because we are staying in smaller towns, but the friendliness of the local people is so heartening. Examples are the waitress in a restaurant, a young man pumping diesel next to me at a fuel stop, a big rig driver waiting with us to go through the truck wash, the staff at the RV parks we visit. Everyone is friendly and they just seem to want to engage in conversation, especially when they learn we are Canadians. It makes our time in Texas so memorable.