First, I have a confession to make. I have been lazy with the blog updates for the last couple of weeks, since we were in Texas. My excuse is that I was afflicted with a horrible malady called "Cedar Fever" or "Mountain Fever".
It is an allergy to the pollen of the Mountain Juniper bush which is prolific in mid and western Texas, and it is at its height in December. The pollen count this year is at record high levels.
This allergy causes cold-like symptoms, including congestion, cough, sore throat, red runny eyes, and a general feeling of malaise.
The only cure is to leave the area, and as we left Texas and passed through New Mexico and Arizona, the symptoms lessened. Interestingly, the sanguine Navigator was not affected, although she had to put up with my grumbling ruminations. Fortunately, our relationship survived this difficult few days and I am back to my usual mellifluous self.
We can look forward to three months at our winter home. I will now update you on the travels of the last week of our journey. 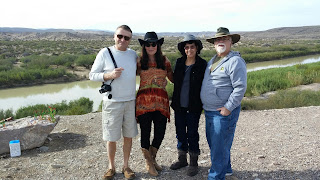 Our three days in Alpine, Texas were spent in the company of two good friends, Alicia and Barry. They are fulltime RVers, and we met them in Cedarwood last summer when they stayed for a while next door to us. Their home park is in Alpine, and we stayed in a site adjacent to theirs. They are very knowledgeable about the surrounding area of Big Bend, and they graciously accompanied us on day trips around the region. It was a fascinating, and very enjoyable few days.
Big Bend National Park is located along the Mexico border within a loop of the Rio Grande, and the mountainous scenery is breathtaking. We were enthralled by Boquillas del Carmen, where one can stand on a bluff and look across the river to a rural Mexico village, and wave to the people on the opposite riverbank.
We spent a long day in the National Park, and drove about 300 miles. Distances in this region are vast, but the wide-open state highways have a speed limit of 75 mph (120 km/hr).
On another day we visited Fort Davis, a very picturesque historic town, where we enjoyed a great dinner at the Blue Mountain Bistro. The winsome Navigator purchased a lovely black western hat at a local hat maker's store in Fort Davis.

We left Alpine on January 1, and proceeded west for 100 miles on US90 to Van Horn, where we joined I-10. On our return trip in the spring, we intend to take US90 from Van Horn to San Antonio, a distance of 470 miles. This will be an alternative to the usual I-10 route, and will take us through the historic towns of this frontier region.
We passed through the city of El Paso in light traffic, and arrived in Las Cruces, NM, where we stayed at Coachlight RV Park for two nights. There is a fascinating little diner attached to this park, called Pit Stop 292, where one can eat a great southwestern breakfast surrounded by 1960s and 1970s music memorabilia. This fascinated the Navigator, who was in her element looking at the vintage posters as I consumed my bacon and eggs. 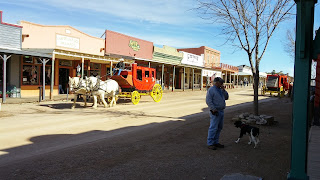 Our next stop was Benson, Arizona for two nights. The manager of Benson I-10 RV Park has become quite friendly; we have been stopping here twice a year for six years now, and he recognizes our rig even before we walk to the office.
We drove out to Tombstone the day after we arrived here. It is always nice to visit this authentic western town which has been preserved much as it was during the Wyatt Earp silver mining days. 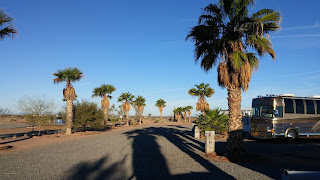 Our final overnight stop was in Dateland, Arizona, which is a very small desert community located on I-8, 65 miles east of Yuma. We discovered a delightful desert RV park called Oasis at Aztec Hills. For $25, we had a long level pullthrough site with a paved patio, 50 amp full hookups, in a beautiful, quiet desert setting. The park was just far enough from the interstate that there was no traffic noise. I went outside at 10pm, and the clear sky was ablaze with stars and an incredibly bright quarter moon. We could hear coyotes in the far distance. This will definitely be a park we return to repeatedly. It is a great alternative to Yuma, which is extremely busy in the winter months. 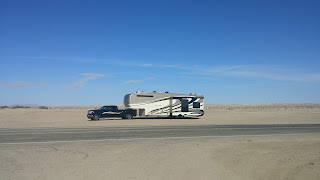 Our last day's drive took us through Yuma and into California, and we turned away from I-8 at El Centro to begin our drive over the Palomar Mountains to our resort. We stopped for lunch in the desert, I started the generator, and we experienced the first technical difficulty of the entire trip. Our 14 year old trusty Yamaha generator malfunctioned, and unfortunately took our microwave with it. I will write a detailed post shortly describing these problems, and the resolution. 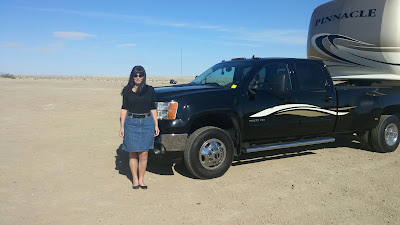 We arrived at Rancho California Resort at 2:00pm on January 6, right on schedule, and started settling in for the next three months. It is good to be back, but as I have said in an earlier blog post, I feel a small sense of regret that our long cross-country odyssey is over. I thoroughly enjoy the journey, more and more each year. It seemed like a series of day trips rather than a long interminable drive, because of the way we schedule our stops and limit the daily distance. It is an incredibly fulfilling way to travel, and experience the people of different regions, and their ways of life. Three months from now, we get to do it all over again, in warmer temperatures.