Finally - On The Road Again! 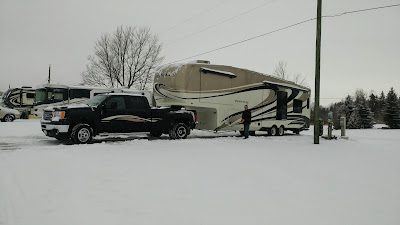 The date we left Ontario this year, was the latest since we started fulltiming - December 22.
This was necessary because the College semester was extended this year due to the faculty strike in the Fall. We had been at Milton Heights Campground since the beginning of November, and during the two weeks prior to leaving, we experienced some very cold weather (-14C, 7F), and a few inches of snowfall during the night before we left. 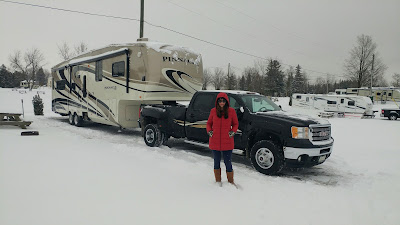 I retracted two of our slideouts during the night, so I did not have to shovel the slide topper awnings in the morning, and we awoke to 6 inches of heavy wet snow on the morning of December 22. We really wanted to leave on the 22nd, because the forecast was calling for an extended bitter cold snap, along with snow squall activity from the Great Lakes. I took a look at Highway 401 outside the park, and saw that it was wet and only a little slushy with no ice, so we decided to go for it.

I filled the freshwater tank with 80 gallons of water, hitched up, and headed down Appleby Line, Highway 407, then the QEW. We reached Fort Erie an hour later in light traffic, and crossed the Peace Bridge to the USA. We were treated to a congenial border officer, who processed us quickly without us having to leave the cab of our truck, and we were on our way after he wished us a pleasant journey.

We decided to stop for the night at the Walmart in Fredonia, NY, where we have stayed several times. We spent a quiet, restful night, and left the following morning at 6:00am for our next stop, the Flying J truck stop in Jefferson, OH, where we had another quiet night’s sleep.


The next day we passed through downtown Cincinnati at 7:00am, and stopped at a Cracker Barrel just south of the city for a great breakfast, then continued to our next overnight stop at Singing Hills RV Park near Bowling Green, KY. This was Christmas Eve.

On Christmas morning, we left Singing Hills after replenishing our water tank and discharging waste water, and continued toward Nashville in almost non-existent traffic. We took Briley Parkway around Nashville, stopped at a Waffle House for breakfast (open 365 days a year), and entered the Natchez Trace Parkway at its northern terminus near Franklin, TN.


Christmas afternoon we reached our two-day stop, Natchez Trace RV Park, and settled in for the evening. The next day, we went into Tupelo, MS and spent an enjoyable day visiting the downtown area, and the Tupelo Automobile Museum, followed by a great dinner at Fairpark Grill in downtown Tupelo. This was actually a celebratory dinner for The Navigator’s birthday, which was on December 23. She decided, with her usual wisdom, to celebrate in Tupelo three days later, because it is one of her favourite places.


As I write this, we are at Rivertown RV Park in Vicksburg, MS, and the weather is very cool, but dry. The decision to leave when we did, without delaying, was a good one, because the whole of the Northeast, including the Great Lakes region, is in the grip of a week-long bitter cold snap. Erie, PA, which we passed through on December 22, has received a record snowfall in the last three days, and a city-wide emergency has been declared. There are extreme cold weather warnings posted for the whole of Southern and Central Ontario.

In the words of Willie Nelson, it is
Good To Be On The Road Again.

After a busy summer and fall,
with our new business Huronwoods RV Service,
along with teaching at the college, I look forward
to 4 months of travel, relaxing in California, then
a month in Northwest Florida in April.

Some pictures courtesy of The Navigator.