As I write this, we are relaxing at Coachlight Motel and RV Park in Las Cruces, NM. Today's journey from Benson was another easy drive through desert terrain.
We were headed east, and there was a strong 30mph wind blowing from the southwest, which helped to push us along. We averaged 12.2 miles per gallon, driving at 70mph, which is better than the 11 mpg average we usually achieve. 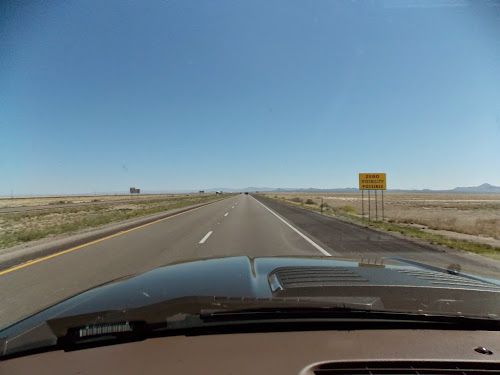 The gusting wind was blowing up some dust, but it did not get to the point of causing visibility problems. There are large yellow signs in this area, warning of dust storms.


We passed from Mountain Standard Time in Arizona, to Mountain Daylight time in New Mexico, and lost one hour in the process. We crossed the Continental Divide just east of Deming, NM, at an elevation of 4585 feet, which is the highest point on our trip east.
As we were cruising at 70mph, we were slowly passing a mile-long eastbound freight train, which in turn was being passed by an eastbound high-speed Amtrak passenger train on a parallel track that had to be doing 90mph. We managed to capture a picture of the two trains. 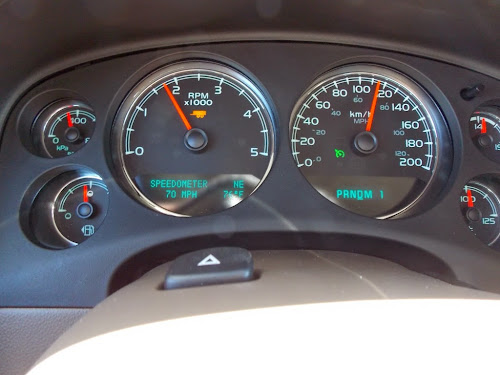 Coachlight is a motel with a small RV park attached, in Las Cruces. We have stayed here several times, and it is a convenient overnight stop at $18 Passport America rate.
Tomorrow we leave for Balmorhea, TX, which is a small settlement in the West Texas desert, near the junction of I-20 and I-10. We will pass through the city of El Paso, which is on the border with Mexico. Juarez, Mexico is just across the Rio Grande River. We will change time zones again tomorrow, losing another hour as we pass into Central Daylight Time. 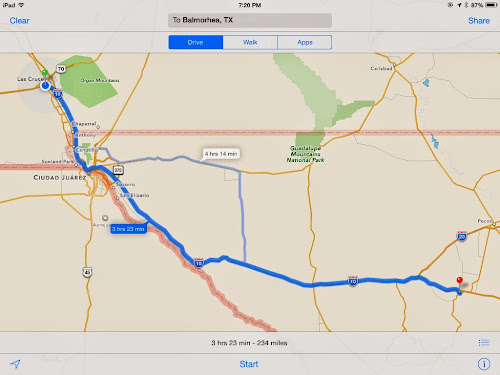