We left Robert, LA which is near the north shore of Lake Pontchartrain, at 10:00am, and made a stop at a brand new Walmart in Pontachoula to pick up a good heavy-duty umbrella.
We would need two umbrellas for walking around the French Quarter of New Orleans, because there was heavy rain and thunderstorms forecast for the entire day.
We did not take the Pontchartrain Causeway, as the visibility wasn't good, and I didn't like the idea of being on a bridge in the middle of the lake, 12 miles from either shore, in a heavy thunderstorm. We took I-55 south past the western shore of the lake, then joined I-10, and came into the city from the west. This route really highlights just how much water surrounds the city, and how vulnerable it seems to hurricanes like Katrina. Most of the 50 miles was on an elevated highway surrounded by lots of water and swamps.
We arrived at French Quarter RV Resort during a thunderstorm and torrential downpour, checked in and backed into our spot, which was directly adjacent to an elevated section of I-10 downtown. The location is ideal for walking around the French Quarter, as it is literally two blocks away, but the resort itself is noisy with traffic on the freeway which is only 100 feet from our site. We would stay here again, but only at the half-price Passport America rate, and only for one night.

At 2pm we decided to test out the new umbrella, brave the rain, and walk over to the French Quarter for lunch. It was fortunate that it was quite warm, 75F, so the wet weather was a bit easier to take. We had lunch at the Oceana Grill on Conti Street, and it turned out to be an excellent choice. I had Blackened Redfish with Crawfish Ettouffe, accompanied by Jambalaya and Collard Greens. The Navigator had a Crabcake Burger with Garlic Potatoes. We followed it with a shared helping of New Orleans Bread Pudding for dessert. The food and the service was first-rate, and it was truly a memorable meal. 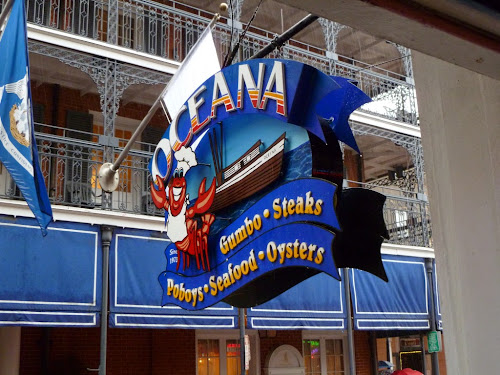 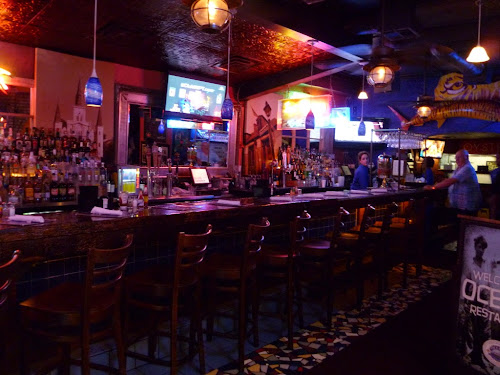 We walked around the French Quarter for three hours after lunch, and the rain finally stopped at about 5pm. The district appeared exactly the same as it did in 2003 before Katrina, with the same traditional and historic buildings, and many of the same businesses we remembered from 12 years ago. Even on a rainy Tuesday afternoon, there was a pervasive sense of festivity and friendliness, just as we remembered from New Year's Eve 2003. It is proof that a great city can rebound from a devastating natural disaster.
It was definitely worth the visit. 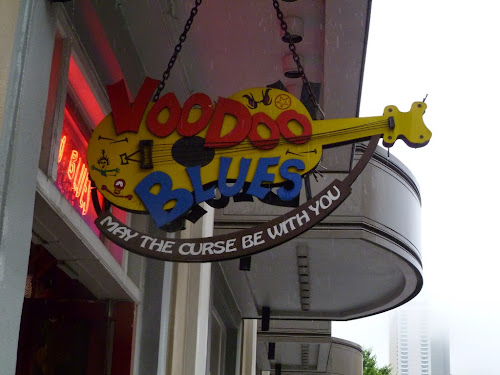 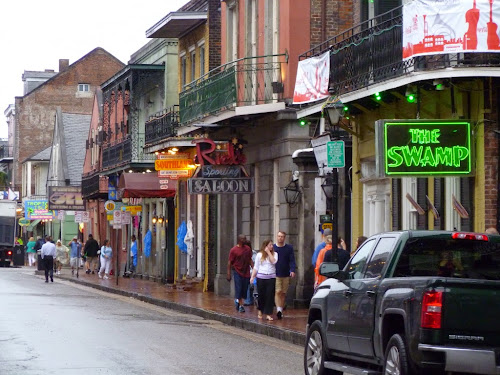 Tomorrow we leave at 11am for Theodore, AL, which is just over two hours drive away. If it is not raining, we will walk into the French Quarter for a Cajun breakfast. 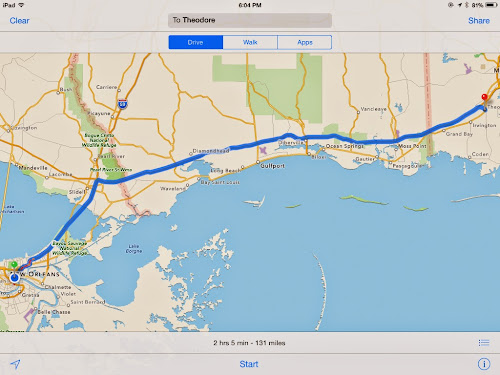